Operational Assessment of the Department of Corrections

Oklahoma’s Department of Corrections (DOC) is responsible for the management, maintenance, and security of 22 correctional institutions across the State and the approximately 16,000 inmates housed within the facilities. With a total budget of $603.7 million for Fiscal Year 2022, DOC receives the 6th-highest appropriation among State agencies. In recent years, the Legislature has directed funding to the agency for implementation of a modern offender management system, for salary increases to improve the ratio of correctional officers to inmates, and to upgrade facilities.

Oklahoma’s Department of Corrections (DOC) is responsible for the management, maintenance, and security of 22 correctional institutions across the State and the approximately 16,000 inmates housed within the facilities. With a total budget of $603.7 million for Fiscal Year 2022, DOC receives the 6th-highest appropriation among State agencies. In recent years, the Legislature has directed funding to the agency for implementation of a modern offender management system, for salary increases to improve the ratio of correctional officers to inmates, and to upgrade facilities.

Inmate population trends have been a key change between 2007 and the present, and population is what drives DOC’s operations. In 2007, inmate population was projected to increase, while current projections signal a continued decline. The recent decline is partly attributable to criminal justice reforms, including the reclassification of certain non-violent crimes, increased use of diversion initiatives, and implementation of an administrative parole process. As lesser offenses are diverted from DOC, the general population in DOC’s facilities will reflect those convicted of more severe offenses. This shift will impact operations as this population may require greater supervision and may serve longer sentences. However, the declining population also presents an opportunity for DOC to improve the efficiency of its operations.

DOC facilities house only those inmates who are convicted of crimes by Oklahoma courts. The Department also coordinates with private prisons, halfway houses, and county jail programs to manage the varying levels of convicted offenders. For the purpose of this operational assessment, LOFT evaluated only those facilities managed and operated by DOC. Similarly, analysis of inmate population data reflects the population housed in facilities that DOC is responsible for managing and not the entire population of inmates across facilities not owned or operated by DOC.

LOFT’s assessment of the agency is presented in two parts: Part I of this report examines the department’s current practices, with a focus on identified areas for improvement. Part II identifies strategies for improving operations. 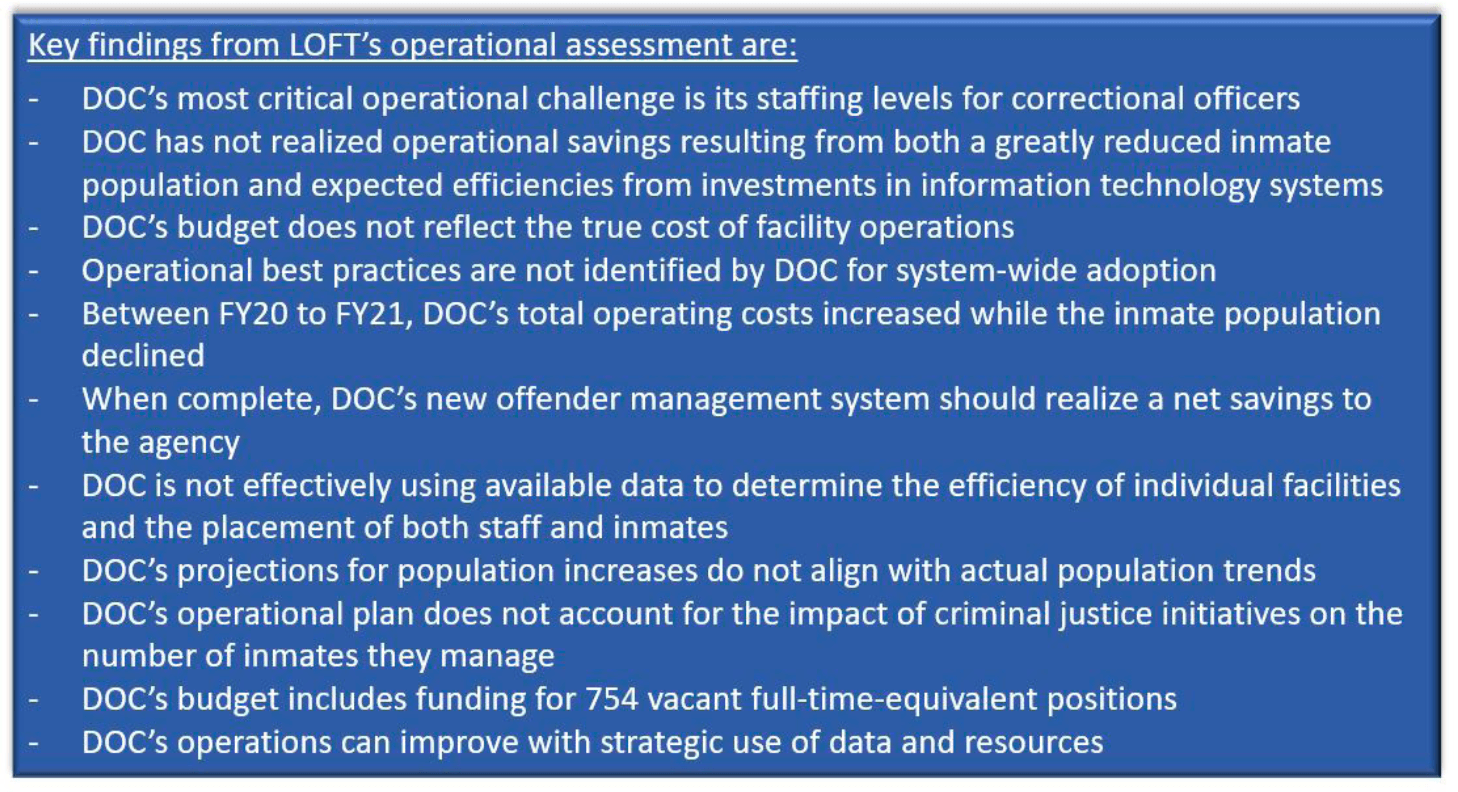 Part I: Operational Challenges and Inefficiencies

DOC operates less like a unified correctional system than it does a collection of 22 individual facilities. Best practices among facilities are not identified by DOC for sharing across the system and facility costs for the same services vary widely. Additionally, there is an overall lack of strategic planning by the agency. For example: DOC’s operating costs are increasing as prison population is decreasing (capital costs excluded); DOC’s population forecasts over the past seven years have exceeded the actual population by 20 percent; DOC presents its budget in a manner that does not reflect the true cost of facility operations and limits strategic decision-making; and the agency does not have consistent processes to track inmate records, resulting in use of inefficient manual processes and duplication of effort.

DOC is also not strategically addressing its low staffing levels and inefficient or underutilized facilities. For example, DOC is not using available data to examine the efficiency of each facility or allocate staff and inmates to those deemed most efficient, either for operational costs or for better management of inmates.

In order to adapt to changing circumstances, DOC must shift its approach from managing just the immediate needs of individual facilities to considering the long-term needs and system sustainability. This shift requires engaging in evidence-based budgeting, which necessarily begins with accurate estimates of inmate population for the coming year.

Savings from the current decreasing inmate population should be used to invest in the most staff-efficient facilities available. DOC should conduct a review of all facilities to determine which can be upgraded to meet the Department’s needs, based on realistic staffing levels. Regular facility audits and analysis of facility costs would allow DOC to determine which correctional centers operate the most efficiently so inmates can be moved to these facilities and best practices can be implemented throughout the entire system. While strategic planning must account for current trends, DOC should also prepare for the possibility – and build in flexibility – for
an increasing population. This consideration should not prevent DOC from reducing facility capacity, but rather ensure that a contingency plan be maintained. In determining if and which facilities to close, DOC should use objective, data-driven metrics that include facility design flexibility, efficiency, workforce availability, and the local economic impact of a closure.

Likewise, data can be used to more effectively target pay raises for the retention and recruitment of correctional officers while recognizing the different needs of different facilities. DOC recently enacted an across-the-board pay raise for all employees. LOFT found that DOC could have saved $26 million by targeting more generous raises to areas most needed. Finally, the Department must maximize available data and become more transparent in its decision-making process to ensure that projected improvements are achieved.

Proposed Strategic Pay Raises. (This table represents the annual funding within DOC that should have been saved through operational gains due to less inmate population and funded but vacant positions. This table shows how DOC could be more strategic with their pay raises by bringing all DOC employees to at least 110 percent of their county of operations median wage.) 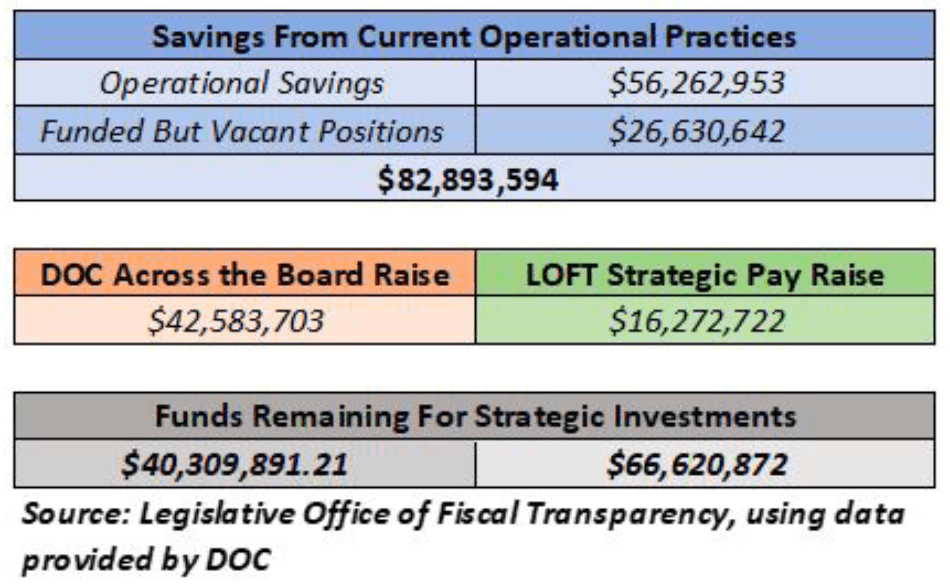 Performance and Benefits of the State-administered Health Insurance Plan