In a school setting, teachers are considered the most influential aspect to a student’s academic progress. Accordingly, a majority of the resources dedicated by the State of Oklahoma to public education are expended on teacher salaries and benefits. Oklahoma has approximately 43 thousand public school teachers, and spends close to $2.9 billion annually to fund their salaries and benefits.

Recent workforce trends, educational performance outcomes, and concerns about a potential teacher shortage have led policymakers to examine how teachers are compensated, how Oklahoma’s total compensation structure compares against the regional and national marketplace, to what degree compensation effects the workforce, and how other states are attracting and retaining quality educators.

With this evaluation, the Legislative Office of Fiscal Transparency sought to provide a complete picture of the total compensation provided to public school teachers and determine the regional and national competitiveness of Oklahoma’s pay. LOFT’s research resulted in three key findings:

Finding 1: When Adjusted for Cost-of-Living and Tax Burden, the Average Oklahoma Teacher Salary Ranks 1st Within the Surrounding Region and 21st in the Nation. 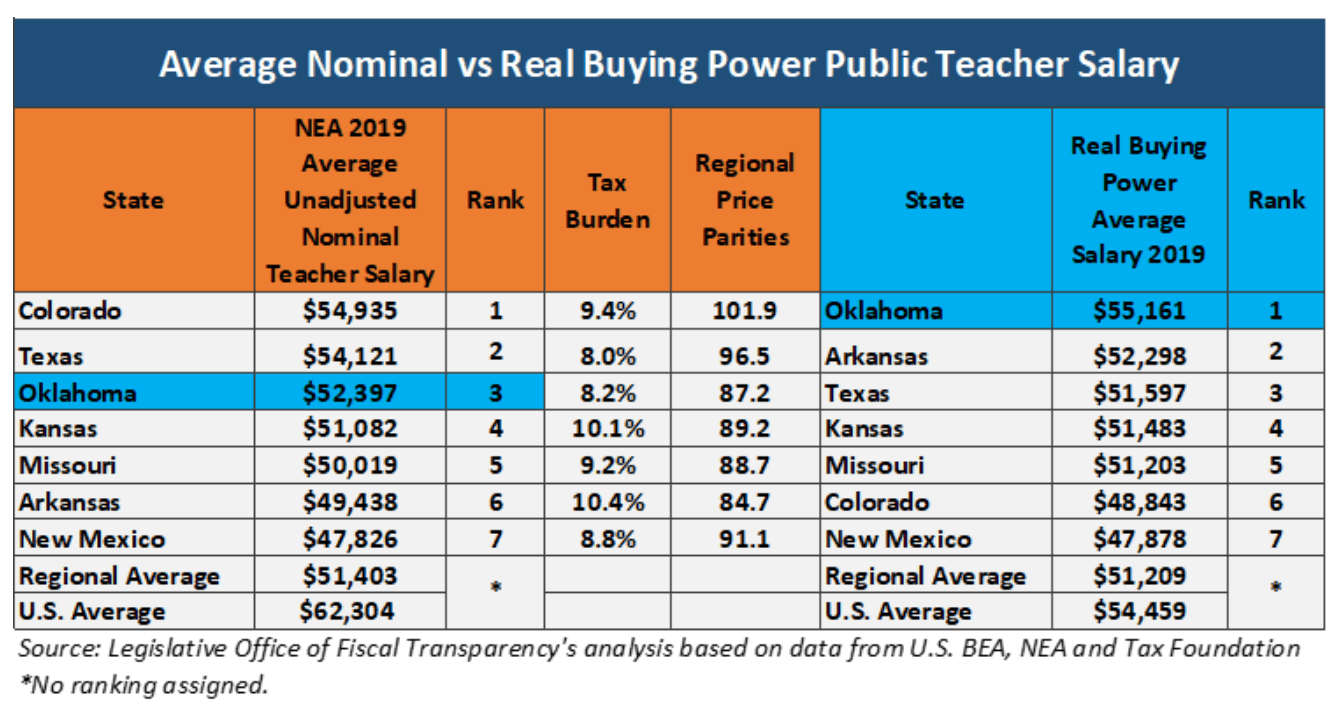 Despite statements from both the National Education Association (NEA) and the U.S. Department of Education urging states and school districts to factor regional cost of living and purchasing power into salary comparisons, LOFT found no existing national comparison of teacher compensation factored for these variations. 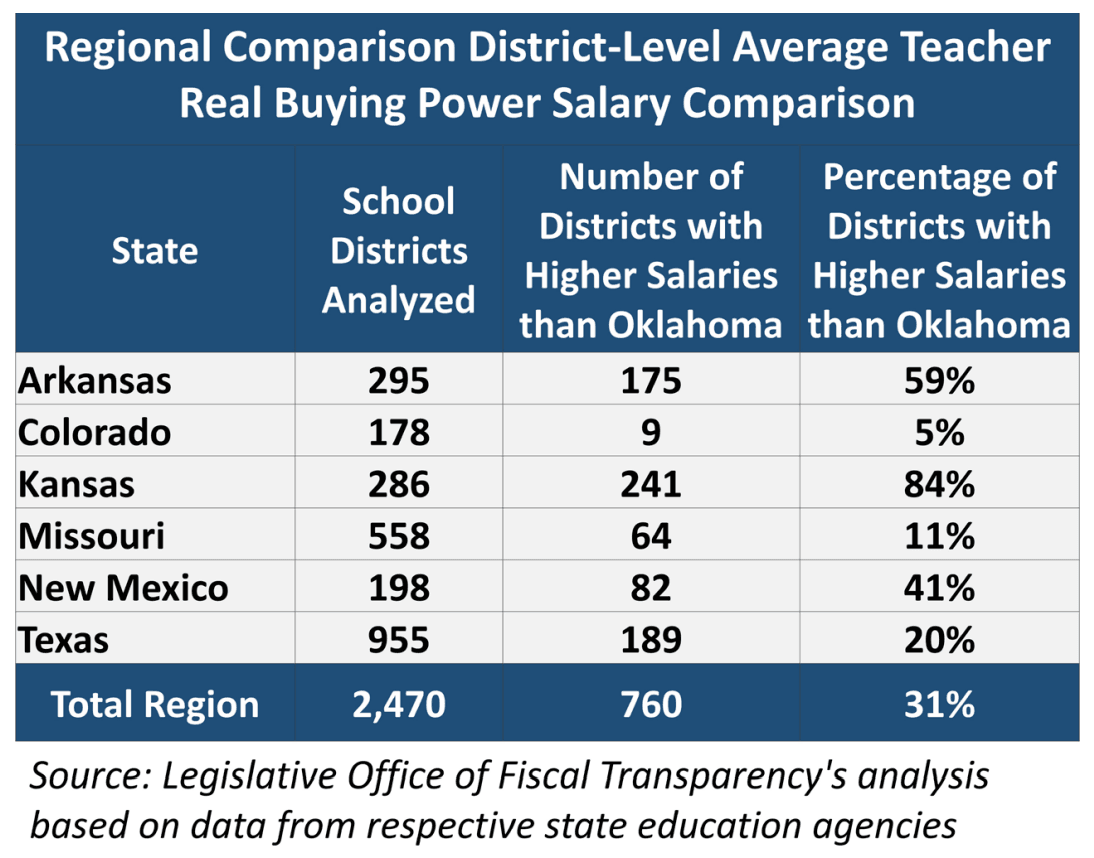 Using data from the U.S. Bureau of Economic Analysis, the NEA, and the Tax Foundation, LOFT adjusted state-level salary data to reflect the real buying power of teacher salaries and found Oklahoma’s compensation levels are highly competitive both regionally and nationally. After adjusting for tax burdens and cost-of-living differences, the average Oklahoma teacher salary ranks as highest in the surrounding seven-state region and the 21st highest in the nation. Teacher benefits, which include retirement, the state-funded health insurance premium for employees, and contributions to Social Security, are included in reported state salaries. Benefits paid to Oklahoma teachers are equal to a third of total compensation.

An analysis of the average salaries across 2,470 school districts in the seven state region revealed that only 31 percent of school districts offer higher average teacher salaries than Oklahoma’s, after adjusting for real buying power.

The majority of Oklahoma’s public schools utilize a traditional salary system structured around a series of “steps” and “lanes” that are based on educational attainment, professional development, and years of experience. Oklahoma’s compensation structure is heavily weighted on the front end, with an emphasis on raising starting salaries, but provides limited income adjustments at the mid and late-career points.
Compensation primarily based on years of service applies a one-size-fits most approach, limiting recognition of exemplary teaching, the varied skills or training required of certain subjects, or the market environment for difficult to fill positions. Additionally, there is little financial incentive for teachers to pursue post-graduate degrees. The use of teacher salary schedules also yields limited returns for Oklahoma teachers and may be contributing to shorter careers in the profession.

While state statute provides flexibility to Oklahoma schools to adopt independent salary schedules – and LOFT identified a few that are doing so - most utilize the traditional salary schedule that other states and large school districts have moved away from. Regional peers like Colorado and Texas are instead adopting innovative, market-based approaches to attract and retain high-quality teachers. From a state perspective, Kansas may be Oklahoma’s greatest competitor for teacher talent, but at the school district level, LOFT found Dallas to be the most competitive.

Like most states, Oklahoma is experiencing shortages in the teacher workforce due to attrition, retirement and a reduced pipeline of new teachers. However, unlike most states, the Oklahoma State Department of Education (OSDE) does not collect data detailed enough to identify the number of unfilled positions or concentrations of need, whether by subject area or geographic region. An average of 10 percent of public educators leave the profession annually, and Oklahoma’s replacement rate is of concern. Since the 2010-2011 school year, Oklahoma has experienced a 25 percent reduction in the number of students earning degrees in the field of education. Over the past 10 years, graduates from Oklahoma’s public institutions are enough to fill just 46 percent of the vacancies created from teachers retiring over the same period.

To better understand the challenges and potential opportunities within the teacher workforce, LOFT analyzed the Oklahoma educator pipeline from college campus to the classroom and found the following: communication gaps, poor data collection, and a lack of proactive strategies. LOFT did not observe an evidence-based, unified statewide strategy to address teacher shortfalls with recruitment or retention. 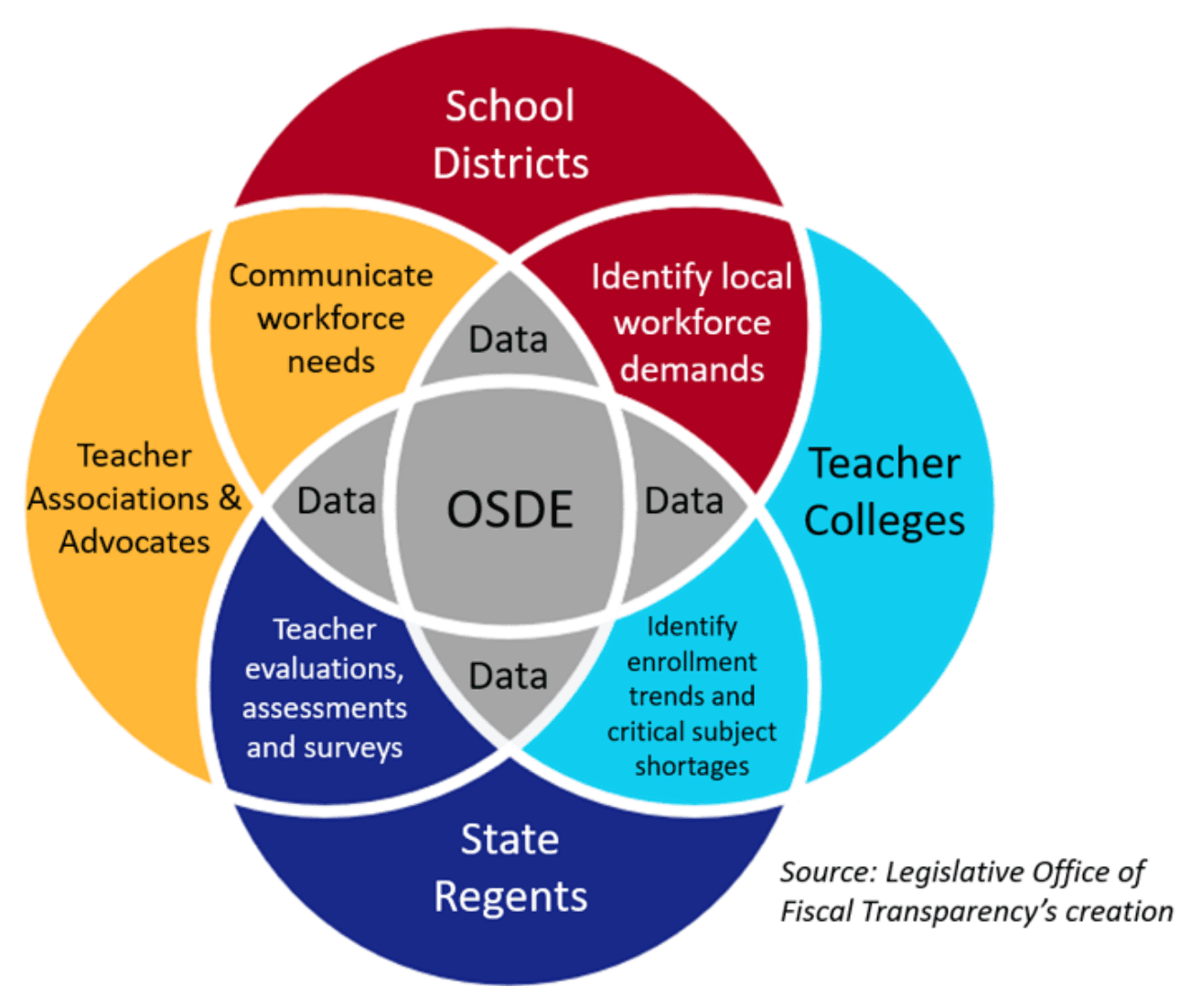 The limited coordination among the various stakeholders (depicted at left) stem from a lack of data and information from the classrooms and schools reaching the lead education agency, (OSDE), and other key education entities including the Oklahoma State Regents for Higher Education and teacher preparation programs. For example, these stakeholders do not currently coordinate forecasting of teacher retirements, or identify critical shortage areas to direct undergraduates to during their coursework and certification process.

Additionally, teacher exit surveys do not currently capture data about compensation’s role in a teacher’s decision to leave. Absent sufficient data about pay as a factor in teachers leaving the profession, it is reasonable to conclude that there are other drivers into those decisions. It is LOFT’s assessment that, without a root cause analysis of teacher turnover, further investments into compensation will have limited impact on retention rates.