In 2006, as part of a comprehensive plan to improve Oklahoma’s infrastructure, new revolving funds were created under the Oklahoma Department of Transportation (ODOT) for specific needs, one of which was dedicated to County Improvements for Roads and Bridges (CIRB). This fund, which is derived from a share of motor vehicle collections, dedicates state revenue for high priority county road and bridge projects, as selected by county commissioners through their respective regional districts.

As directed by statute, the majority of CIRB funds “are to be used for the sole purpose of construction or reconstruction of county roads or bridges on the county highway system that are of the highest priority as defined by the Transportation Commission.” However, statutes were amended in FY20 to allow a portion of CIRB’s revenues to be used by counties for transportation maintenance and operations.

Through this evaluation, the Legislative Office of Fiscal Transparency (LOFT) sought to determine the performance outcomes of CIRB in improving structurally deficient county infrastructure across the State.

Finding 1: Despite Infrastructure Improvements Under CIRB, One Out of Five County Bridges Remain Structurally Deficient

Between 2008-2019, CIRB contributed to an overall 24 percent reduction in structurally deficient county bridges. However, significant infrastructure challenges remain that impact local communities and the State’s transportation system. LOFT’s analysis found that one out of five county bridges in Oklahoma are structurally deficient, and specific geographic areas of the State have higher concentrations of deficient infrastructure. 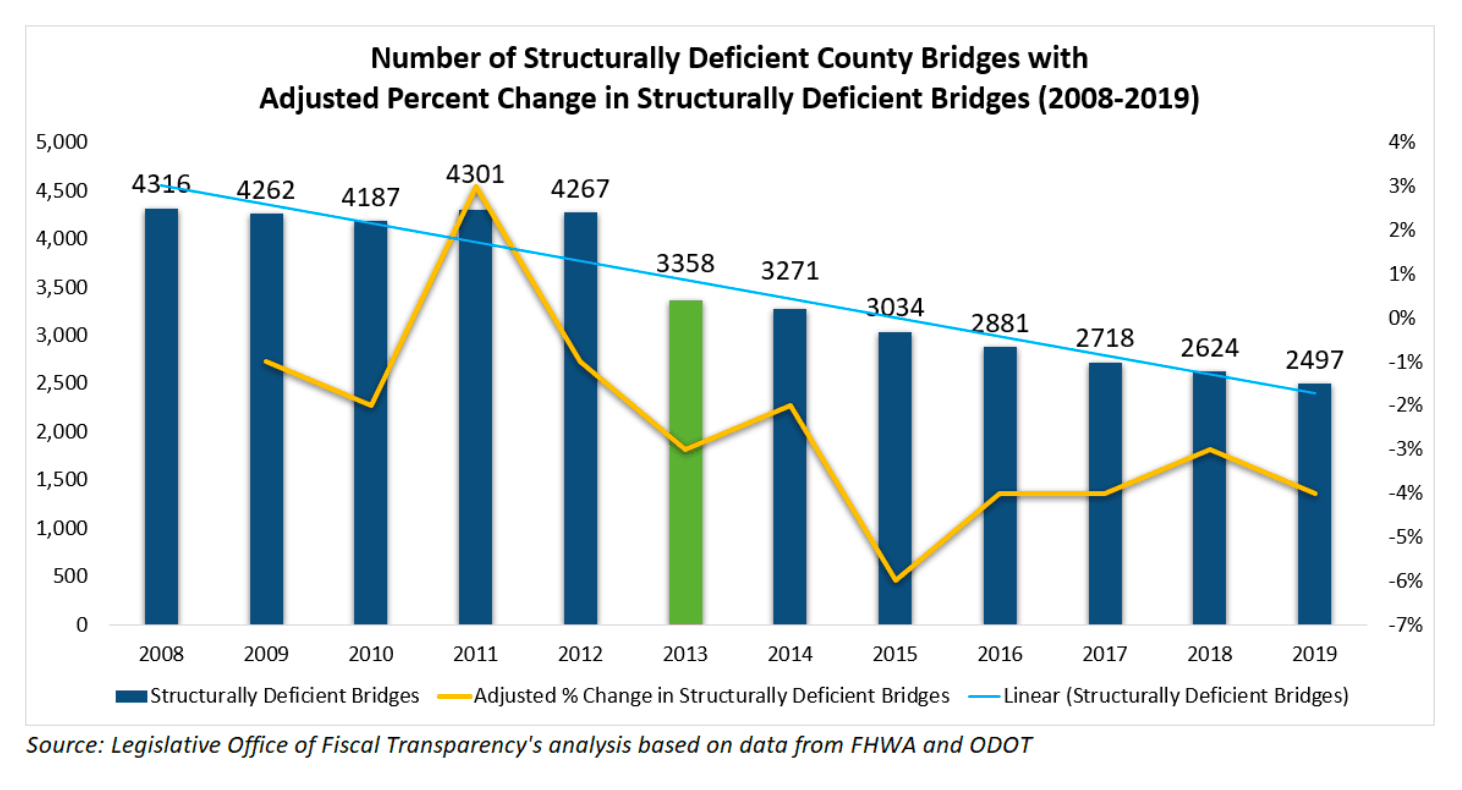 In 2019, the State had 1,070 bridges classified as “school bus critical,” a designation given by ODOT to bridges determined to be critical safety concerns to schools due to low tonnage capacity. LOFT identified a communication gap regarding signage reflecting this status, as well as notification to school districts of when a bridge is identified as school bus critical.

LOFT forecasts increasing costs for the State due to aging and rapidly deteriorating infrastructure. Eighty six percent of Oklahoma’s structurally deficient bridges are more than 50 years old, and county bridges are typically not engineered to last as long as ODOT-designed bridges, which have a 70-to-80 year lifespan. For example, 69 county bridges built within the last twenty years are already classified as structurally deficient.

LOFT’s regional comparison found that Oklahoma ranks first in both the total number and percentage of structurally deficient county bridges.

In FY20, the State made a combined investment of $386 million to maintain and improve county roads and bridges, representing 35 percent of all state transportation funding. CIRB accounts for 31% of funds dedicated to county infrastructure.

CIRB funds are apportioned in equal amounts of up to $15 million to the State’s eight Transportation Districts. LOFT’s analysis finds CIRB’s current funding formula fails to account for areas of greatest need or greatest concentration of infrastructure, either for quantity of county bridges or total county road mileage.

CIRB was not intended to be the sole funding source for replacing structurally deficient bridges, but a tool to accelerate the effort. In FY19, ODOT estimated it would cost $811 million to replace the 2,497 structurally deficient county bridges in Oklahoma. The annual available funding per bridge ranges from $28,000 to $125,000 due to the equal apportionment of CIRB funds to Circuit Engineering Districts (CEDs) without factoring in need or density of structures. 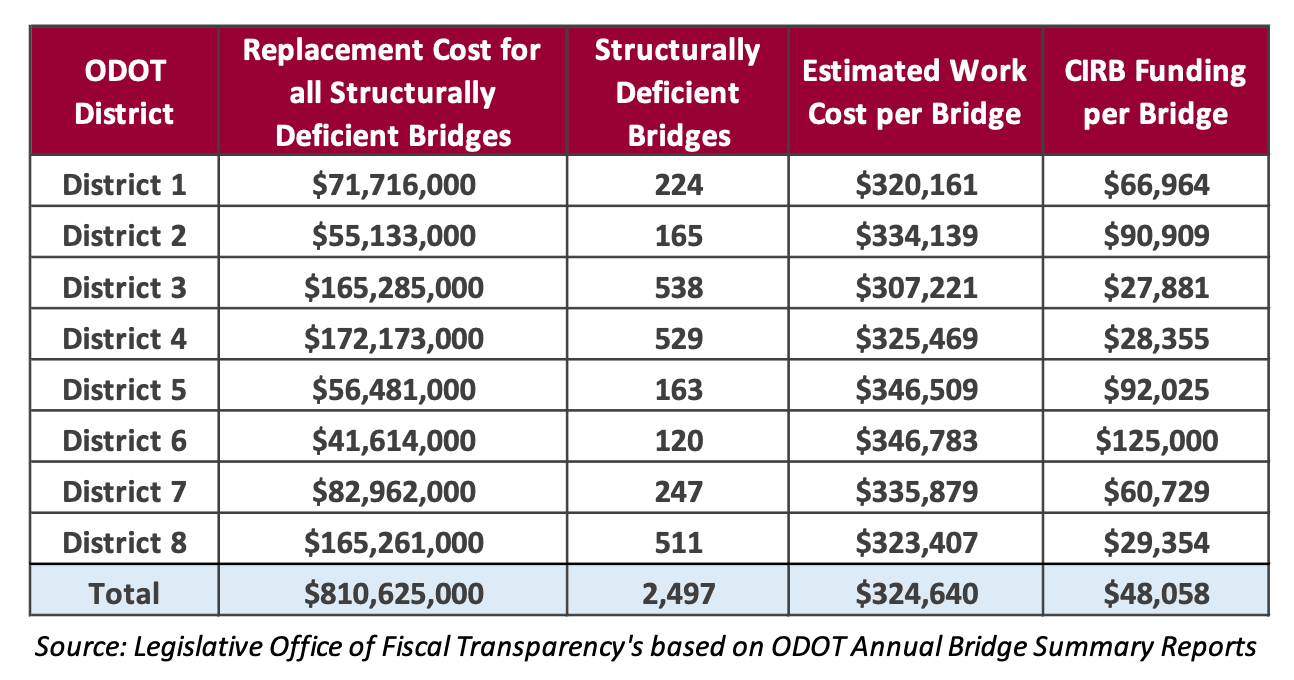 Recent legislation (HB2892) adjusts one-fourth of CIRB’s apportionment formula to be distributed directly to counties with the greatest infrastructure needs; the change takes effect July 1, 2021.The county-directed funds are to be used for maintenance and operations.

LOFT also determined that counties may not be maximizing federal funding, as half of the State’s counties do not utilize federal funds.

LOFT’s review of CIRB found no clear criteria for prioritization within the process for selecting projects to ODOT for consideration of CIRB funding. 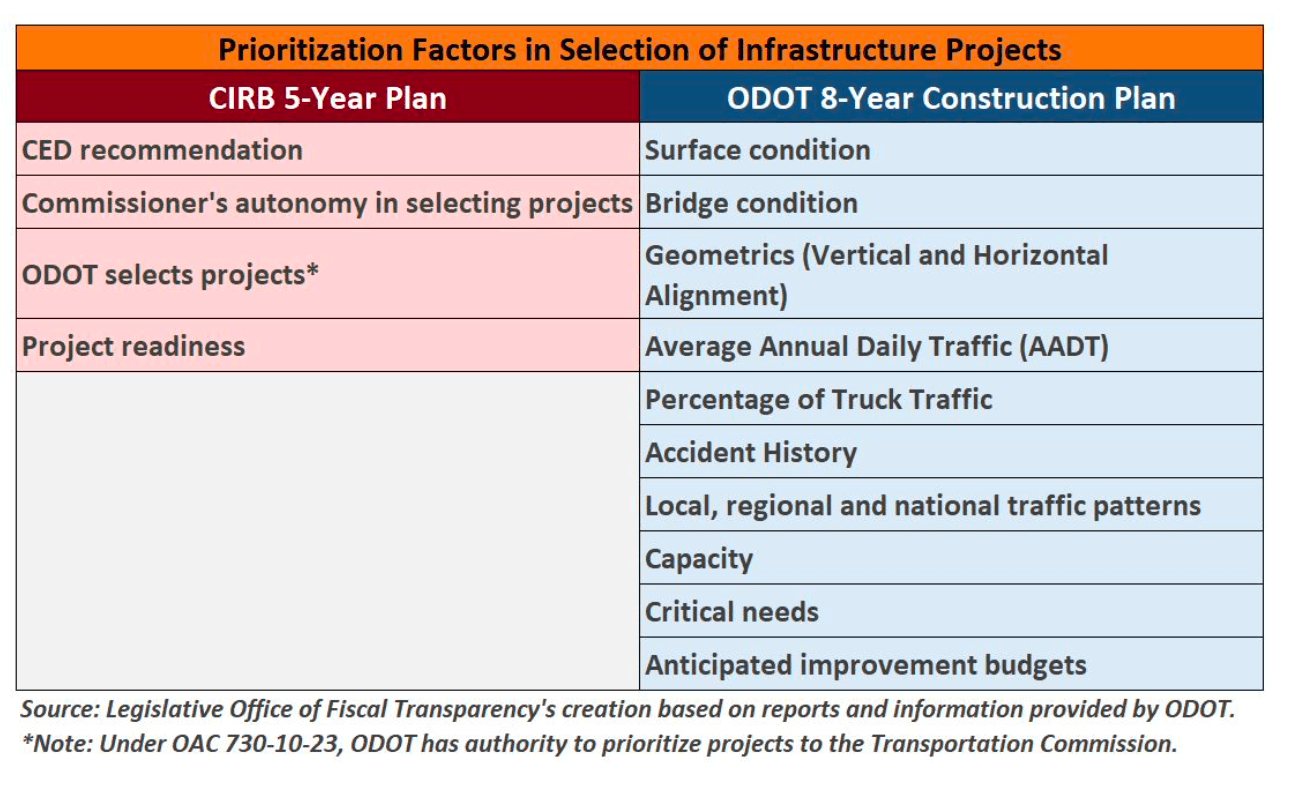 In contrast to the transportation data metrics used by ODOT, LOFT finds that CIRB fails to utilize a data-driven approach in selecting infrastructure projects, instead relying exclusively on County Commissioners. With needs that far outweigh availability of funding, the CIRB program will have limited impact without prioritization.

Throughout the evaluation of CIRB and accompanying fieldwork, LOFT observed both inconsistent standards and a lack of oversight for county bridge projects. These issues could be contributing factors to the number of bridges that require eventual replacement and the rapid deterioration of newer structures.

Several states have developed methodologies and weighted formulas for allocating limited financial resources to their most pressing infrastructure challenges.

LOFT’s analysis finds there is a critical need to optimize the State’s investment by promoting enhanced communication, integrated decision-making, and needs- based prioritization for transportation infrastructure projects. LOFT identified Nebraska’s County Match Program as a best practice from which to model infrastructure collaboration efforts across the State.

Performance and Benefits of the State-administered Health Insurance Plan